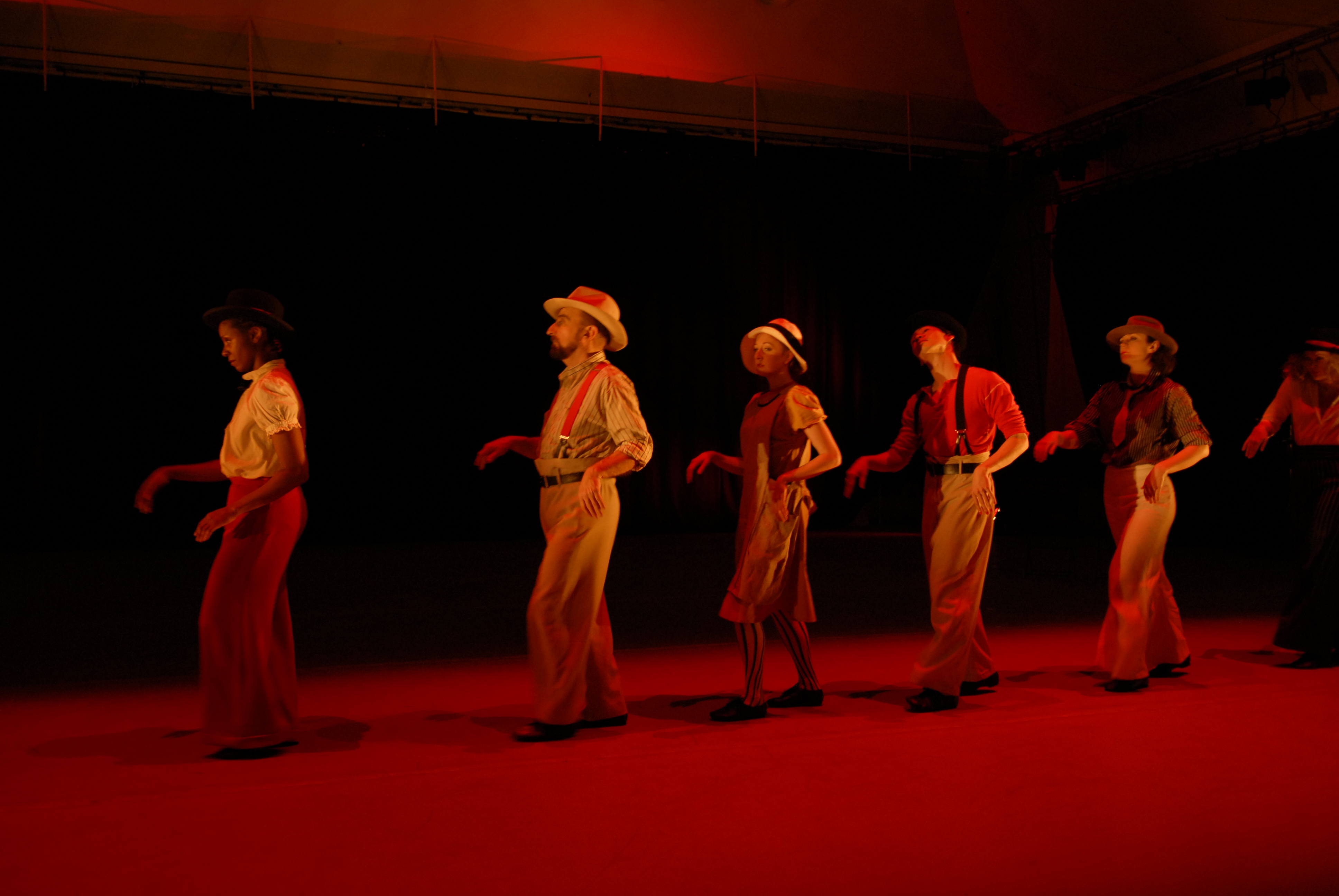 ‘We had all the nations in New Orleans….. but with the music we could creep in close to other people’
Jelly Roll Morton

“This project began with the music; I became fascinated by Jelly Roll Morton and the broken quality of the old Lomax recordings from 1938, which the composer Jonathan Eato introduced me to. Together we worked with an episodic form which paralleled the fragmented Lomax recordings of Jelly Roll talking, playing and singing…
In more recent years I have been drawn to the use of everyday gesture and movement, to the mundane and seemingly insignificant and, apart from loving the music and its low down lyrics, I responded to the craft of under statement and its combination of street vernacular with classical form. Jelly’s theories of jazz provide a useful template for artistic construction.”
Jacky Lansley

“The integrity of Lansley’s raw materials is always exemplary….its cast are an engaging, saggy-bottomed crew, their dance routines carrying the tobacco-stained atmosphere of a cheap dance hall, their comic bickering and panhandling accompanied by ghostly reminiscences from the great Jelly Roll Morton”
Judith Mackrell, The Guardian

“Hips waggle lazily, hands flap from the wrist. The audience laughs, caught at once by the loose, louche quality of the dancing……the idea of place runs through Jacky Lansley’s new double bill…..it has a lucid calm.”
Zoë Anderson, The Dancing Times

“The choreography celebrates an attitude to life through its anecdotal quality and wealth of details, a sense of optimism despite living on the bread line. This evocation of a bygone New Orleans is haunted by recent images of the city swept by Hurricane Katrina, showing survivors in their inundated homes, putting on the same brave face despite the odds; Linking both parts of the performance is the desire to position oneself on the contours of an edge, where dancers and audience alike can physically reflect on a flow of feelings. The varied group of people onstage reminds us of the social and political role that dance can have in bringing people together. Confronted with the engulfing presence of the sea, the only outlet here is the political and emotional force of the community.”
Estelle Ricoux

“Off-centre and providing a constant but understated working space, was a Barber’s Shop. I delighted in the world created here – the yellow parameter of light projected on to the floor, seemed to give hint to the street-light it maybe stood under. I liked the functionality of the shop’s presence and the transformations it gave the performers as they passed through it, receiving treatment unselfconsciously – on one occasion giving a re-style from a 1930s slick to a modern Mohican, hilariously incongruous with the time and setting. The old-style microphone that stood down-stage on the right, now came into its own when a male performer took up position behind it and sang unaccompanied. I felt a rush of delight, this piece constantly challenged the audience in its viewing of it as a dance piece alone”
Lucy Tuck