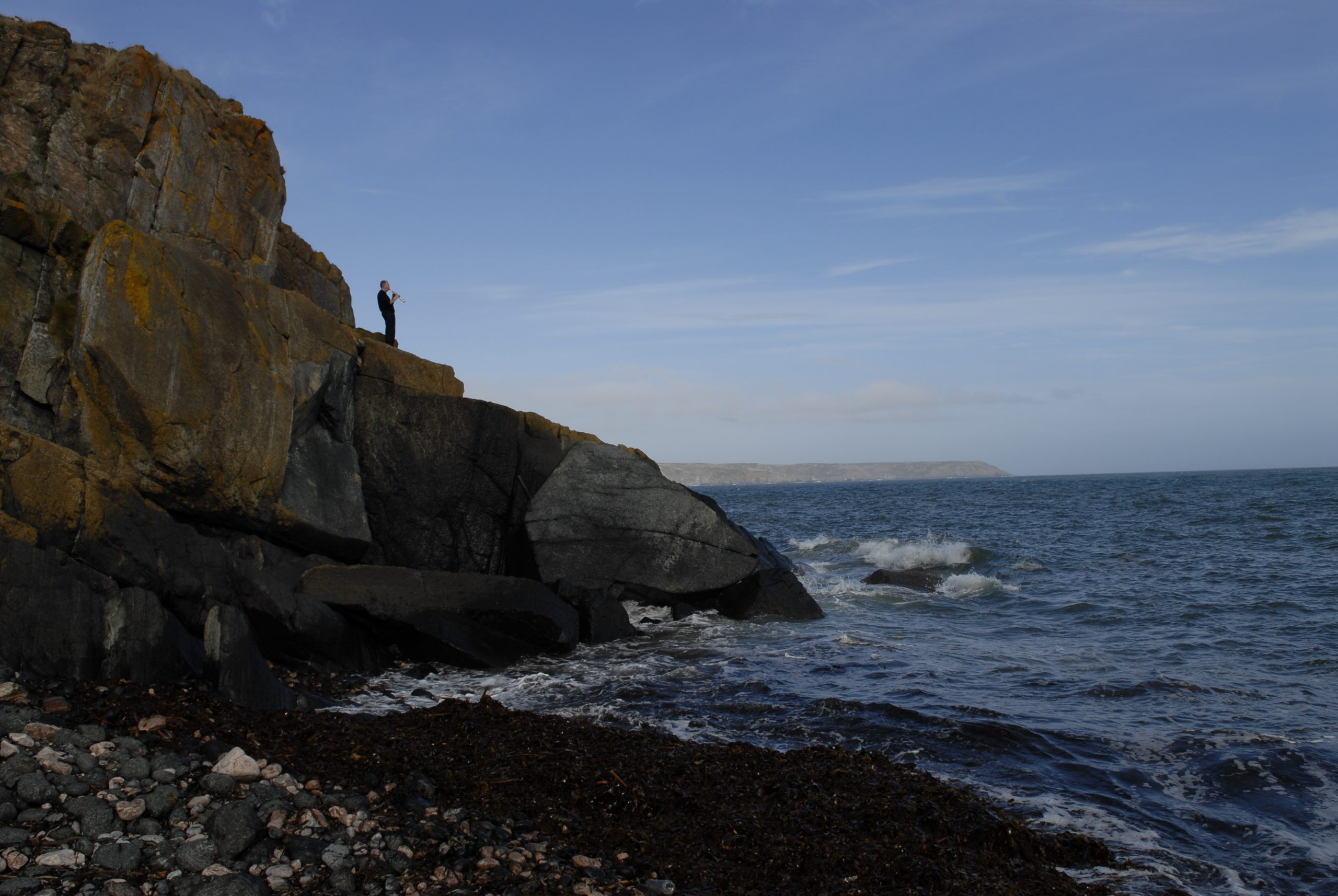 ‘View from the Shore’ translates the experience of the Cornish coastal landscape into the theatrical space and works with composer Lindsay Cooper’s beautiful Concerto for Sopranino Saxaphone and Strings played live by the Cornish Sinfonia with soloist David White.

“As millions before us we observed the ancient presence of the rocks and the particular and wonderful juxtaposition of the constantly moving sea against the resisting stillness. We then took these experiences back into the studio – as a painter, sculptor, author might do.”
Jacky Lansley, Programme notes

Premiered in the Clore Studio, Royal Opera House, ‘View from the Shore’ was also the overall title of a programme, which included another work, Anamule Dance (2007).

REFLECTIONS FROM AUDIENCE AND ARTISTS

“……the simplicity of its presentation was paramount to the depth of its focus. Fittingly, it was rather more the freedom of its movement that allowed for, and essentially supported its freedom of interpretation. In other words for the discerning ignoramus like myself this came as a hugely refreshing and pressureless step into the infinite waters ahead. You could go where you liked, or you could sit back, inhale the salty air and enjoy the view.”
Jonathan Bright

“Reflecting the expansive music, the movement of the dance used the large open space of the Clore Studio to great effect…..On a small scale we found the detail of the movement and mime perfectly evoked the changing moods of enjoyment and apprehension that sea and sand provide…….All in all we left the theatre feeling happier than we went in….”
Terry King

“The oldest of the cast by nearly 20 years, I spent periods of time, particularly near the start and end of the piece, standing and looking. There was a feeling of being an elder, a man of some responsibility for the continuance of what was probably a precarious existence on the edge of the land. In the middle of the piece I participated fully, particularly in a duet with Sheron Wray, a marvellous dancer who takes an instinctive grasp of the emotional core of what she is performing and commits herself to the choreography with a strength and passion that is a joy to work alongside. This duet had a sense of tragedy and loss and built into a ferocious intensity. After it came a more joyful and exuberant section which ended with the death of a young man – perhaps a memory of the loss that was the subject of the duet. Finally I returned, like the rest of the cast, to standing and looking.”
Fergus Early

“No one could call this a narrative ballet. Subtle and understated, it slips under the wires of consciousness and flowers when you are least expecting it. ”
Francesca Morrison, The Stage