Jacky Lansley is a choreographer, writer and performance artist who has been practicing for over four decades across diverse contexts. Her work combines visual and theatrical disciplines and is often created out of personal and political concerns. The artist had an early training with the Royal Ballet school and company and at The Place where she forged collaborations with Richard Alston (Strider) and Sally Potter (Limited Dance Company)*. She was a founder of UK’s major independent dance studios – X6 Dance Space and Chisenhale Dance Space – and in 2002 she founded the Dance Research Studio (DRS), which has supported the making of more recent works including: Holding Space (2004); View From the Shore(2007); Anamule Dance (2007); Standing Stones (2008); The Life Class (film, 2008); Guests R&D (2010); Guest Suites (2012); and Crossing Paths (2016) out of which emerged About Us (2019). Partnership organisations have included the Royal Opera House, Modern Art Oxford, DeMontfort University/Leicester, Dance4, Bluecoat Theatre/Liverpool, Oxford House Theatre, Siobhan Davies Studios, Trinity Laban and Royal Holloway University of London.

Throughout her working life she has been developing processes and training methods for interdisciplinary performance practice and in 2009 she launched a professional development programme: The Speaking Dancer: Interdisciplinary Performance Training (SDIPT) for dancers and actors. She guest lectures in dance and performance at a variety of institutions and was an associate lecturer at Winchester and Plymouth Universities. She was a founder and editor of the seminal New Dance magazine, and has written extensively on dance and performance including articles for Performance Research, The Open Page, Dance Theatre Journal and the British Film Institute. She is the co-author (with Fergus Early) of The Wise Body: Conversations With Experienced Dancers. Her new book, Choreographies: Tracing the Materials of an Ephemeral Art Form was published by Intellect Books in 2017. She has been the recipient of numerous awards from The Arts Council of England and other trusts and funding organisations including: a Lisa Ullmann Travelling Scholarship to the USA and the Daiwa & Sasakawa Foundations to support a research trip to Japan which inspired her project Guest Suites.

In 2018 she was awarded One Dance UK’s prestigious Jane Attenborough Award, for services to dance. In 2019/20 she worked in collaboration with CELL gallery, who curated the archival exhibition X6 Dance Space: Liberation Notes to international acclaim. She now balances her time between her own creative practice and supporting intergenerational artists and companies through mentoring, teaching and directing DRS, which is forging an identity as one of the leading independent contexts for interdisciplinary dance research. 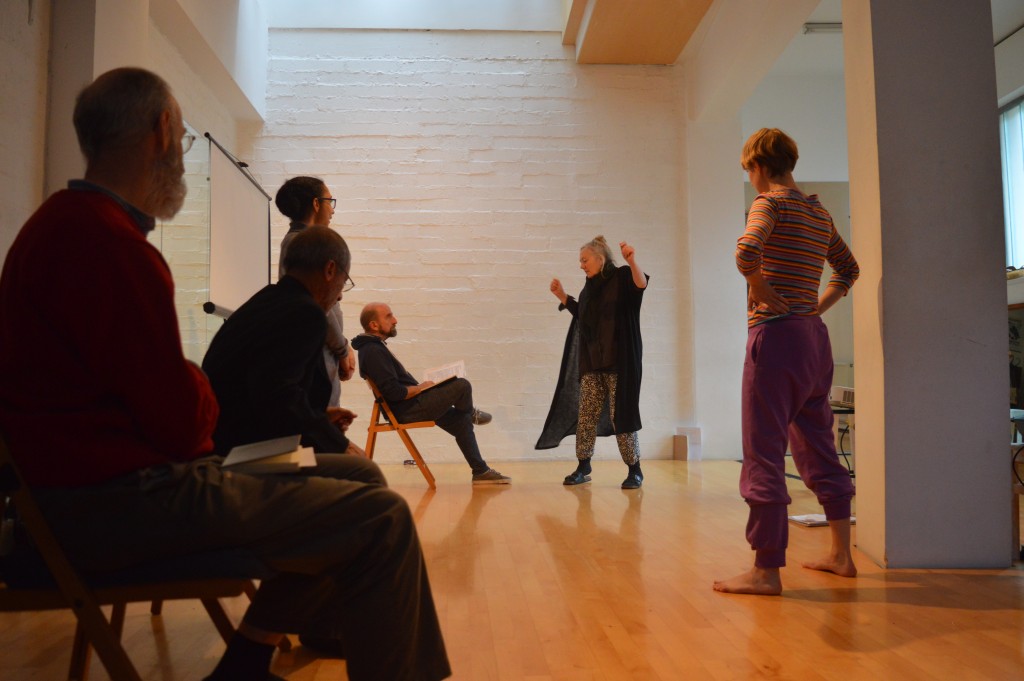 Jacky Lansley in rehearsals for 'About Us' (2017-19) at Dance Research Studio with Ramsey Burt, Vincent Ebrahim, Esther Huss, Maria Ghoumrassi and Fergus Early.