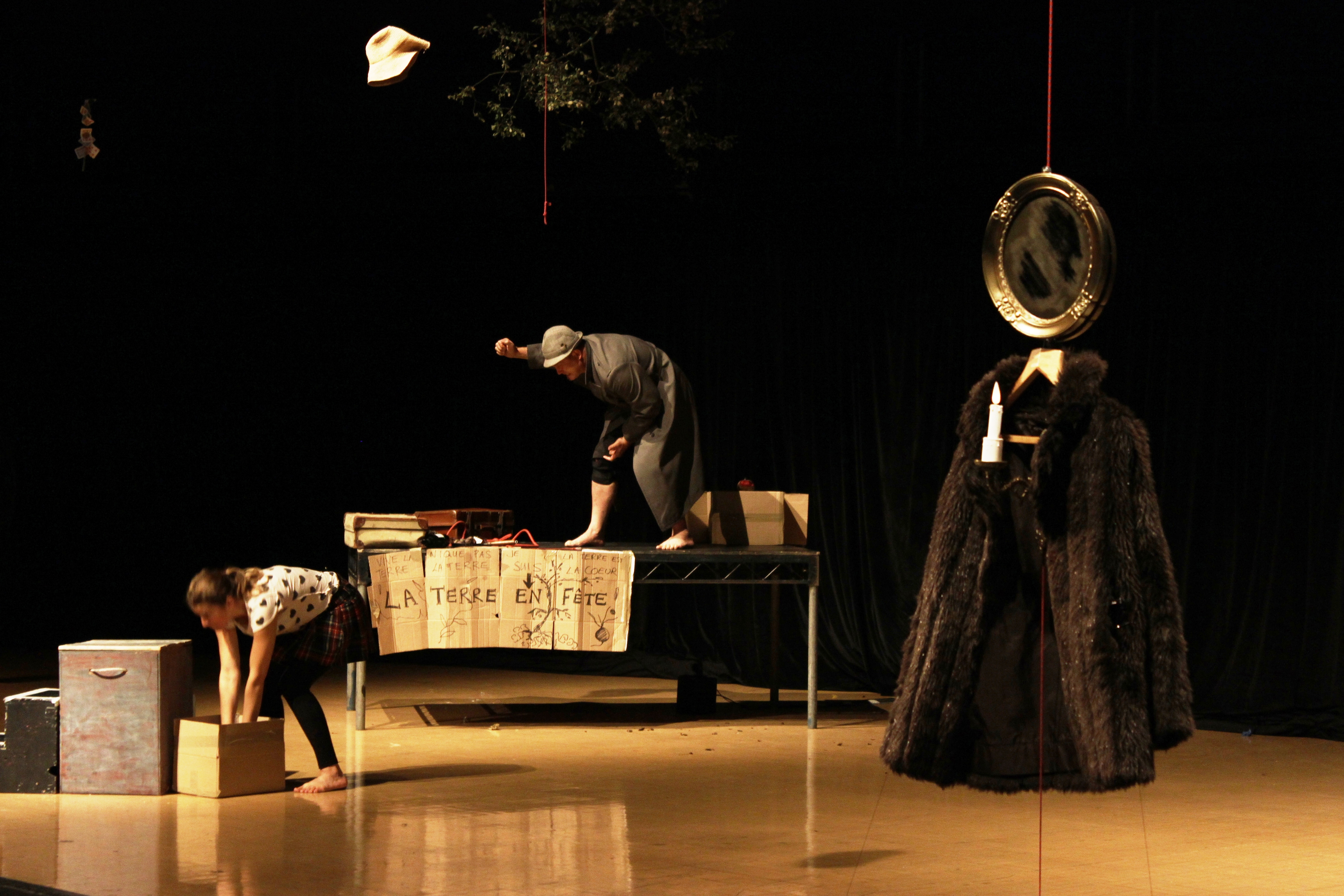 As the title suggests, ‘Guests’ aimed to invite and welcome ideas, processes and people across artistic borders. It was a project about generosity, exchange and collaboration and more and more it became about the how rather than the what. As a team we had to carefully negotiate our different theatrical, conceptual and visual disciplines and experience and in the process we discovered more about what we shared and how we were different.

Themes and images of displacement grew organically from the processes being explored – we realised that the idea of ‘Guests’ could not avoid the problem that the world now has more refugees or ‘guests’ in ‘host’ countries than at any other time. Somehow the artistic imperative to explore difference and strangeness enabled us to approach this difficult theme and in the process, perhaps, we created a model of a small community able to communicate across borders.

A partnership project between the Dance Research Studio and the Hall for Cornwall. Directed by Jacky Lansley and Tim Brinkman.

“Guests suggest invitation – being totally welcome while also coming from somewhere else. A guest is not permanent – they can come and go – a guest can be a displaced person in a host country having a hard time. I am interested in cross disciplined work because it allows us to explore new forms and languages; those that might be required to express the inexpressible.”
Jacky Lansley, blog

“I was torn between two equally intriguing but perhaps mutually exclusive possibilities for ‘Guests’. The first was how might the idea of an R&D week with a showing really allow experimentation. The second (and one I think we followed) was could we together assemble a full-length performance between us all in a week. Before the project I was confident that I could contribute well to the first approach, but I was unsure whether I could (even with preparation) create and realise 40+ minutes of sound in a week. I found that I could and immensely enjoyed the challenge. I think it’s also important to say that the degree of latitude that Tim and Jacky afforded me to follow my creative bottom line rather than requiring me to adopt a more jobbing approach was extremely valued.”
Jonathan Eato

“It was just brilliant. The whole concept was illuminating… I loved the separateness of what that man called ‘the fairground aspect’ it made us audience become individual performers too, as we wandered from act to act but led always by the directorial and lighting ‘guiding hand’. Congratulations to you all.”

“The scope for interdisciplinary transaction (of thematic ideas, skills, intellectual and emotional responses to experience) was rich, not only because of the diversity of input and perspective but also because of the time-frame for project development. Having the chance to commence work in February, focus back in on developing themes in the early summer and then organise the material in readiness for a performance context in September allowed for a mature expressive realisation of the complex strands explored throughout the project. Ideas, response to experience and plans of action deepened through a process of gestation by the time the material was exposed to audience observation. Accordingly, interdisciplinarity – with respect to the diverse creative input resourced and resulting performance realised – was achieved and the development of a shared understanding amongst the group of participants around different intellectual, emotional, spiritual and physical realities was possible.”
Tim Taylor

“Initial themes of dislocation and the notion of The Guest provided a valuable spring board for ideas which inspired the whole creative process. The emphasis was on process rather than a final performance, as a team we had to constantly remind each other that we should be continually exploring and developing ideas even during the showing and discussion session.

The initial development stages were rigorous and encouraged performers and collaborators to work outside of their comfort zones. The idea of working with two directors was a challenge for all involved and I think it was an interesting way for performers and directors to investigate different ways to create and develop work. As a visual artist I was given the valuable opportunity to lead several sessions and to explore the possibilities of guiding the performance through the use of visual stimulus. This process was hugely valuable as I found it fascinating to see how performers and directors responded to the use of different visual inspiration. I felt my contribution added depth and furthered the interdisciplinary nature of this project.”
Fiona Chivers

“I can’t pick [my favourite moment in the project]! Right at the end it has to be the man in the red T-shirt who said the piece made him think and question his own attitude to the themes plus the lady who described herself as a displaced person and highlighted something that she had connected with and felt was absolutely true.
I feel that the project was an ongoing process of discovery and sharing which makes selecting a moment difficult as they built into an overall experience. Looking back over the project, there seems to be a collection of moments with each of the other company members; rather than thinking in terms of moments when I did something, it definitely seems to be a case of moments with specific people/characters, where there was a genuine connection with them. The most memorable moment has to be Jacky laughing uncontrollably for (what seemed like) a good five minutes when Brett and I did our ‘dead dog’ scene.”
Angela Kelly