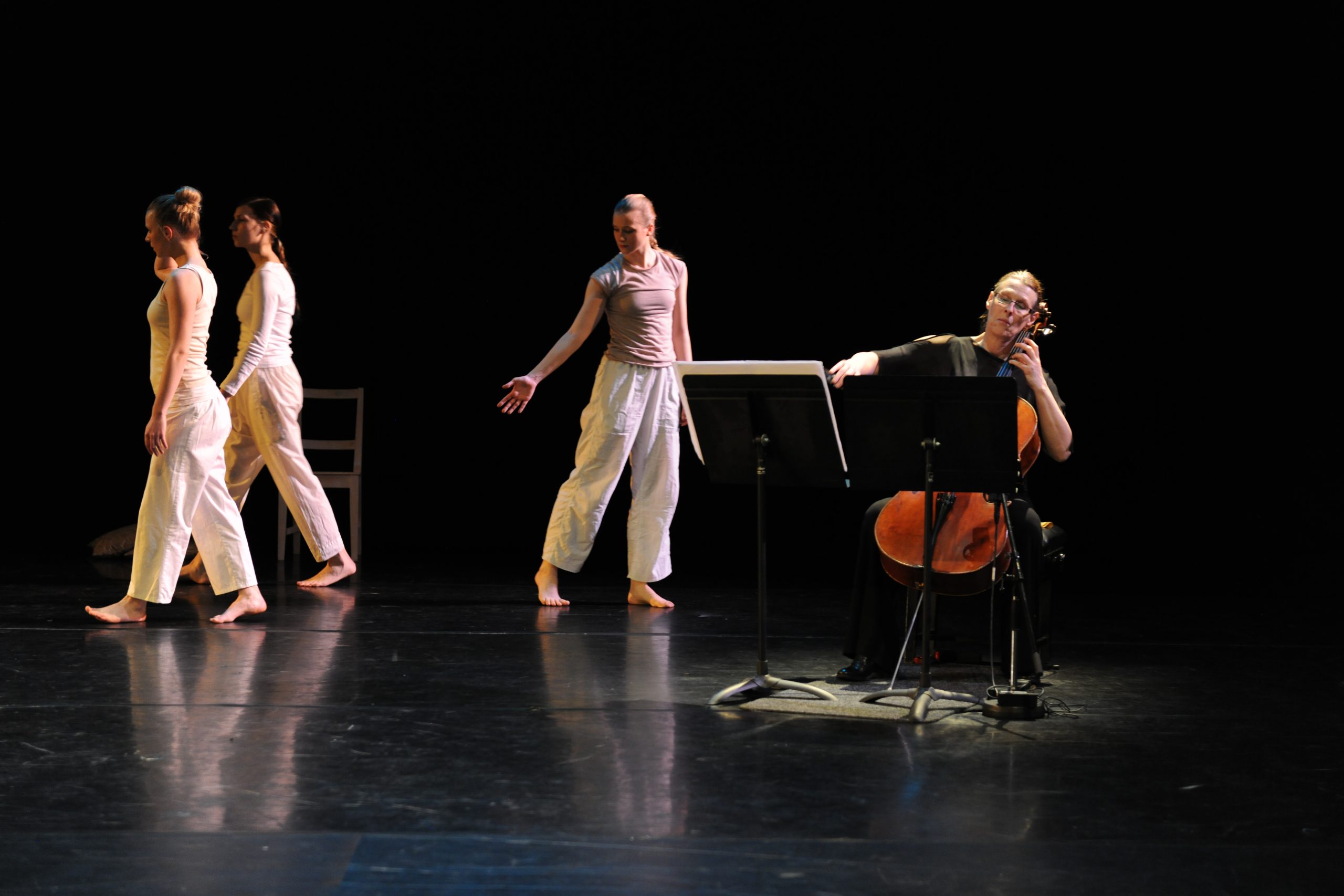 'Guest Suites' was inspired by Bach's Cello Suites which Lansley and her frequent collaborator composer Jonathan Eato used as an artistic template.The first three suites was performed live by cellist Audrey Riley and, on historic recording, by Pablo Casals. Eato's contemporary addition Suite Inserts - a 'compositional reworking' of four movements for cello and electronics - was performed live by Riley and, on laptop, by Eato himself.

Central to 'Guest Suites' is the idea of artists guesting in each other's worlds - “Guest Suites (2012) was developed in phases over three years with a group of six exceptional dancers. We were interested in drawing attention to the conceptual and aesthetic languages in the work and to the dancers’ presence as part of something bigger, where their skill of inhabiting and embodying the material is fundamental to the whole.”
From Choreographies - Tracing The Materials of an Ephemeral Art Form, by Jacky Lansley, published by Intellect Books, 2017

The Clore Studio, Royal Opera House:
‘Lansley, Eato and their guests excel in creating an evening of transitioning musical and visual images that stretch and deepen the perception of Bach’s seminal suites. The different movements cascaded from one point to the next, though the pauses between each movement allowed each piece to have its own distinct signature – within both the music and the dancing’.
Erin Johnson – Bachtrack, 19 February 2012

‘… Lansley treats the music as a series of rooms, which the choreography enters and explores. Five dancers, dressed in baggy white practice clothes, map out the work’s architecture with gently dipping, folding moves. In some sections they move like contemporaries of Bach, their dancing elaborate with courtly detail. In others they are modern visitors, their body language turning harsher and more abrupt as the music, too, is invaded by contemporary voices – an electronic soundtrack overlaying the live cello.’
Judith Mackrell – Guardian, 20 February 2012

York Minster, Chapter House:
‘Dance has long been linked with the church, if not so much in recent times. Furthermore, the full majesty of the Chapter House is only revealed when it is stripped of chairs and brought to life. Nor can Bach’s suites for unaccompanied cello sound any more ethereal than in its spacious acoustic. On all three counts it was imaginative of choreographer Jacky Lansley, her seven dancers and cellist Audrey Riley, to choose this venue for Guest Suites’
Martin Dreyer 6th – York Press, March 2012